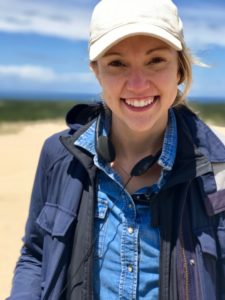 When it comes to video, whether it be web, social, how-to, VR, 360, TV, series, corporate, commercial, or comedy – you name it – I’ve produced it. As a senior producer of content marketing and development at Discovery, I produce branded content for HGTV, Food Network, Travel Channel and TLC and oversee development of new digital shows and talent. I also produce my own podcast Kick Ass in Life where I help recent and soon-to-be grads get hired fast, be smart with money and be happier and healthier. My ebook Kick Ass in your Career  is now on Amazon.

Previously, I managed branded video from conception to completion at Mashable Studios in NYC for brands such as DoubleTree by Hilton, Wells Fargo, Kia and Wheat Thins. Before that, I produced video projects at  RFI Studios.  I’ve also produced radio segments for The Takeaway on WNYC as well as work on Food Network Challenge for High Noon Entertainment.

Originally from Lawrence, Kansas, I crossed the border to study Convergence Journalism at the University of Missouri. After teaching English in rural Spain for a year, I moved to NYC with just a suitcase and a determination– and now I enjoy my work as a producer. In my time off, I take every opportunity to explore New York including camping, hiking and biking.

I’m currently serving on the board of the NYC chapter of the Mizzou Alumni Association, and am a member of the Producer’s Guild of America and Women in Cable Telecommunications.

I look forward to connecting with you!
-Laura (Parkinson) Eshelman